originally published in the VCStar, April, 2015. 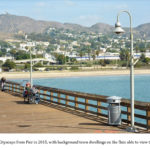 We’re Number One. In what? Best places to live in the US, according to April’s 2015 Men’s Journal.

We beat out trendy, quaint, and jazzy places with our temperate weather and beaches of course, but also our affordability, business-friendly atmosphere for startups, but mostly our retro laid back style. We are, as the Journal states, “refreshingly unpolished.” The Journal approves that we haven’t razed our modest middle class neighborhoods “to make room for trophy homes and luxury condos.”

(And we’ve just been voted the best county in the whole country by a Washington Post Blog!)

Surprisingly, folks from San Diego like to vacation here. They have their own beaches and cool weather, so why come to Ventura? Simply put, it’s our “charm.” They actually call it that in visitor convention gatherings.

Charm! That’s what we have, that ineffable quality, hard to define but we know it when we see it and feel it. San Diego must have spoiled theirs some how. Guess how?

For a town, charm has something to do with scale, layout, building styles, density, crowdedness, and connections to nature. One could list typical attributes of a city—crime rate, health care system, transportation, schools, shopping centers, number of parks, and never get close to discovering charm.

Most people do not realize that Ventura still looks somewhat like it did many years ago—with a variety of neighborhoods, building styles, flowing street-scapes, an open feel, layered prospects for dramatic views and the rolling bouncing hills that back it.

It helps that we have an active historical preservation process, with lots of unique buildings saved.

Ventura never had major cosmetic work on its plain though sunny face. Some find it a bit déclassé compared to our upscale up coast neighbor. But Santa Barbara made itself over to emulate a Spanish town, with homogenized colonial architecture everywhere, more like a movie set than a real beach town that accumulated houses of all types and sizes over time, like Ventura, a town with charm.

But can we keep it?

Our City Council had encouraging words for charm devotees as they reviewed upcoming projects at a recent meeting. They judged many proposed building designs as prison-like, dull, boring. They sent many back to the drawing board. Ventura deserves better than boxy structures built on the cheap.

If you stroll our historic downtown and then along the promenade eventually to the end of the pier, you’ll witness that grand view of endless sky and sea, what philosophers call the sublime. And when you turn around and look back at the city you see the charm of our human-scale town, what those sages call the beautiful.

It’s ribbons of flowing dwellings with not too many stick outs. The colors and almost musical rise and fall of patterned streets respect the hills they sit on. And behind this panorama, the hills themselves, nature still close to us, having our backs as it were, the real foundations of our charm.

As you probably know, they could get developed, right behind the city. A long swathe of curvy hillside could be cut and filled and flattened into a wide ledge by an out-of-area developer for somewhat fancy tract homes lined up on parallel streets.

Many of us hope our City Council will send them back to the drawing board too, or actually back home to LA, or San Diego where their kind of development has taken root and overpowered charm to the point where our friends to the south come here to get what they themselves have spoiled.

We’re Number One, remember, not for what we lack, but for what we have already have and love and often have to fight hard to preserve.

It’s hard to say that just by winning a beauty contest in 2015 that Ventura got discovered by new fancier folks, but that’s how it feels five years later, and not just to me. In 2020 traffic on our streets, housing costs, restaurants all zoomed in numbers, caliber, and price, as did competition for vacant building lots. Big idle swaths of land around the city, crudely fenced for years, now sport heavy equipment in a seeming rush to get infill projects in place before too many locals notice. But we do notice, since we’re getting overfill rather than infill.

Our median housing prices at about $670k turn many back to their current digs, though wealthy folks seem unhesitant to buy even the fancy older and newer homes throughout the city.

A big factor is the Thomas Fire of December 2017 and the over 600 homes burned down. It’s taken a while for those owners to decide what do, of course, but now some of the destroyed and damaged homes on the upper hillside streets sport majestic mansions. They squeeze in tight spaces in a hodgepodge of styles, larger, extravagantly designed, shoulder to shoulder, rebuilt with glass all facing seaward.  Older fancy homes a few streets down list for $1.5 to $3 million. Gentrified Ventura lives in the hills.

Do we still have charm? Yes, but we are losing it, fast. We stopped that big hillside development of McMansions through citizen protests, years of it, then the fire and a nearby oil spill put the kybosh on that unwelcome charm-killer. But our mantra of infill has come back to haunt us. 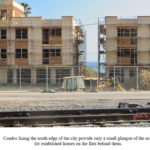 In the harbor area, endless condos suck up all the breathing space and views, with boxy frames, built way too high, right to the very edge of sidewalks. Who walks these days anyway? Only frontline structures have a view. It could have been an elegant coastal village; it’s extravagant warehousing instead.

The single row of three-story condos that runs for over a mile along the south edge of the short streets that flow from the hills down to the railroad and freeway now blocks ocean views. In the 2015 photo looking from the pier back to the city, Venturans in those homes could still see their beloved Pacific. That was a true delight—we once lived there: look down a small lane of very modest houses and wham! there was the glistening ocean to remind you how lucky you were to have charm on the cheap.

We now have the very trophy homes and luxury condos the Men’s Journal warned against.

But we still have charm.

Our architecture still has variety, with many historical landmarks, our downtown revives and now closes traffic for pedestrian walks and outdoor dining, our neighborhoods still create community though feature higher prices, and our locals and tourists still enjoy our less than crowded beaches in usually balmy weather. We have plenty of new and old coffee houses, craft beer hangouts, and a wide variety of restaurants. We have to support them, either dining in or taking out during virus time. 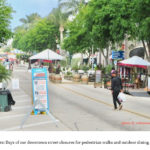 We may be less “unpolished” than we were five years ago, a few sizes bigger, but the city still feels comfortable, walkable, and accommodating—aspects of that nearly indefinable thing called charm.

We can all help save even more of it. Join one of our seven community councils to give input about what’s happening in your neighborhood. Attend Planning Commission and Design Review meetings, now virtually, but soon actually. Follow what’s being voted on in the City Council. Run for office, apply for a committee appointment, volunteer for a commission—all this is still possible in our still small town.

Charm may be in the eye of the beholder, but many of us know what it is, and we’re the ones who have to push to preserve it.