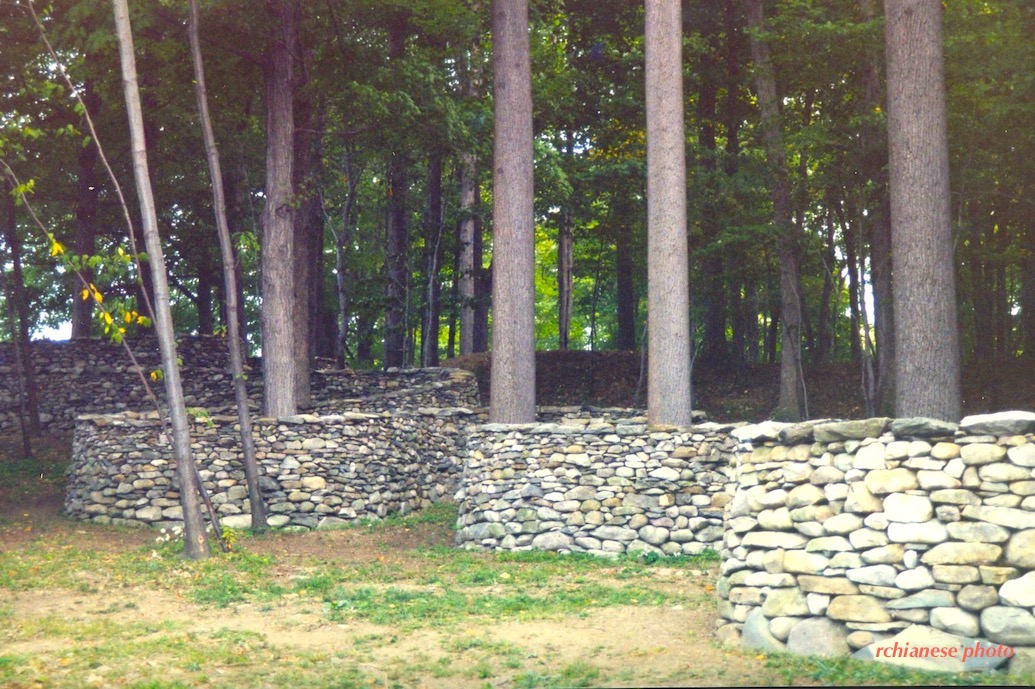 Goldsworthy more than anything else is a practitioner of art trouve or an art of found natural objects that are not artistic in themselves—a leaf, twigs, branches, a fragment of ice, shards of slate, a boulder. Many Earth artists do this, but Goldsworthy employs these materials, usually in multiples, as a sculptor would use pieces of metal and glass or organic media such as wood, bone, grasses and stone. He makes things of them—dazzling things, which are difficult to name or define. He assem­bles natural materials found on site to build sensuous fantasies on ground, on water and in air. He em­braces the natural world as a creative playground. He uses almost no tools nor a plan for the work before he ar­rives on site. Both temporary and per­manent, his works leave one with a sense of the infinite possibilities for re­designing pieces of the natural world as art objects, and using the Earth as a gallery for imaginative constructions.

Many of his constructs are openings, thresholds, arches, spirals, webs, coils or lines of color in a field. Most are not meant to last. Goldsworthy explains how photographs become a key part of his works, their evocation of time and environmental process:

Each work grows, stays, decays— integral parts of a cycle which the photograph shows at its height, marking the moment when the work is most alive. There is an in­tensity about a work at its peak that I hope is expressed in the im­age. Process and decay are implicit.

Much of his work then is “most alive” right before it melts, flows off, blows away, crumbles or disintegrates. Pho­tographs capture the peaks, as if static, inanimate objects have living, devel­opmental sequences.

Storm King Wall, in Sculpture Park, Hudson Valley, New York, seems made to last, though it has neither mortar nor sup­ports beyond the fitted fieldstones themselves. This project evokes not so much ancient stone builders, but rather agricultural borders and dairy walls in use in New England and New York in the 18th and 19th centuries. This hey­day of northeastern farming was soon eclipsed by the Erie Canal, built in 1825. New England lost out to transported goods from the midlands, and the walls were eventually left to fall apart. (By the way, the railroads soon made the extensive canals obsolete—a nice point about rapid, multisystem technological change almost two centuries ago.)

Storm King Wall (1997-1998) evokes this period of time in our agricultural past. Goldsworthy piled it into shape in 17 days with five men and 250 tons of stones from the Storm King Sculpture Grounds. But this wall does not contain or border or divide anything—it swerves, twists and turns, and nearly surrounds trees, connecting them with serpentine curves. It then stretches out and dives into the water just to emerge and stop on the other side of a small pond. The only things historical about it are the stones themselves and perhaps its seemingly arbitrary length, 2,778 feet, which is just over 42 chains in the old British style of land measurement. (It may be just a co­incidence that British Goldsworthy was 42 when he finished it; his father was professor of applied mathematics, and he and his son would have likely known about the traditional use of chains in en­gineering measurement.)

A key unnoticed element of his work in general is its narrative thrust. Like a child putting together blocks, pegs, felt figures or any kind of multiples in patterned repetitions, Goldsworthy seems to have a subliminal story to tell with each piece. These stories linger in the very structure of the work. Visiting them, you begin to unravel the tale.

One of the narratives of this work evokes a fairy tale wall that wanted to
end a life of straight lines and square corners. It tired also of its job of separat­ing and boxing things in. One day it ran free, making wavy patterns on the field and around trees, finally zipping into the water. Referred to as Running Wall, it may be more of a “run­away” wall than a “running” wall. Goldsworthy has set it and our whole concept of boundaries loose through it.

Few people can describe the wall without resorting to storytelling. It has many names. Another alternative title is “the wall that went for a walk,” giving it agency. Some commentators think it is a devotee of nature, defer­ring to its higher power:

The wall twists and turns in and out of trees, utilizing their place­ment to give the wall its interest­ing shape and putting itself sec­ond to the natural landscape of the grounds. It bows to nature once more when it comes to a pond and does not attempt to master it. 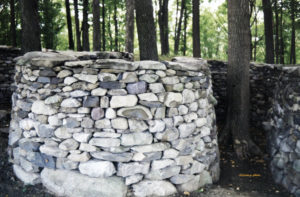 Others think it races snake-like, twist­ing through and sewing the woods together, and then rises up as a water creature:

the seemingly soft wall weaves along the edge of this habitat boundary, peeking in and out and threading disparate patches of the property together…. Upon reach­ing the bank the wall submerges itself, diving beneath the surface of the water and re-emerging on the far shore. Here it makes a quick turn, creeping up to its full height, before heading in a straight rush up a steep hill and across an open field.

For some the wall is hypnotic, mes­merizing us and pulling the rest of the landscape into itself:

The wall, with its intense disci­pline, can dizzy you, suck the ex­panse of the sky and the breadth of the fields into the intense grav­ity of the fieldstone.

We return to an earlier, animsitic form of consciousness with such re­sponses to the wall—one where we see the inanimate object itself as alive and purposeful. Animism predates seeing gods separate from the natural phe­nomena they represent—the forest it­self as alive rather than symbolized by Pan, fauns and tree nymphs. The Wall as an animate creature stirs our imagi­nation, a return to a more primitve or childlike way of seeing and thinking.

There’s an inevitable poetic gloss on a wall like this that many would recog­nize—Robert Frost’s “Mending Wall” and its ironic refrain, “Good fences make good neighbors.” This poem can leave one puzzled if we accept that refrain as a tested piece of northeast rural wisdom about keeping the peace between neighbors.

In the poem, Frost explains he’s scheduled to perform a regular spring ritual. His neighbor wants to replace the stones the winter has loosened from the wall separating their proper­ties. We learn Frost finds the wall itself unnecessary since their properties hold not livestock but different species of im­mobile trees: “My apple trees will never get across /And eat the cones under his pines, I tell him.” Nonetheless the neigh­bor wants to go through with replacing fallen rocks because that’s the way it’s always been done, exposing the unex­pressed theme of the poem—the empty reasons we use to keep ourselves apart.

Goldsworthy invites us to give up the notion of his wall as a barrier or en­closure and see it as a playful spirit in stone. It has wide enough gaps to walk through. It invites connection, pene­tration and the gathering of elements of the landscape into its gentle, open embrace. Goldsworthy’s wall, with its frequent breaks and loops, might have lured Frost and his neighbor to visit each other for a few moments of inti­mate neighborly talk.

The enhancement the wall brings to the extensive 500-acre Storm King Art Center grounds is surely an aesthetic plus, though one is hard pressed to say that the wall has much to do with draw­ing attention to or preserving the nat­ural environment or with embodying some environmental principle. It can of course reanimate our delight in natural materials and forms themselves, seeing them as living things, no matter how unnaturally they are composed.

Goldsworthy as artist admires na­ture, but primarily engages it to test his talent for complex constructions. He toys with the environment, capti­vating us with his high-minded play, usually leaving it undisturbed once his project disappears of its own accord.

If occasionally repaired like Frost’s, Goldsworthy’s wall may last for de­cades or even centuries, though it will tell us less about the natural world, or the enclosed art garden where it re­sides, than about the imaginative en­ergy of its creator.

Robert Louis Chianese, B.A. Rutgers, Ph.D. Washington University, St. Louis (1971), is professor of Eng­lish emeritus, California State University, Northridge; a 1979 Mitchell Prize Laureate in Sustainability; and past president of the American Association for the Advancement of Science, Pacific Division (2012), the only humanities professor selected in its 100-year history. The AAAS-PD  published his monograph, Art Inspired by Science. As a Fulbright Senior Specialist he works to link the arts, humanities and sciences in collaborative efforts on and off-campus in environmental preservation.
Email: rlchianese@gmail.com.