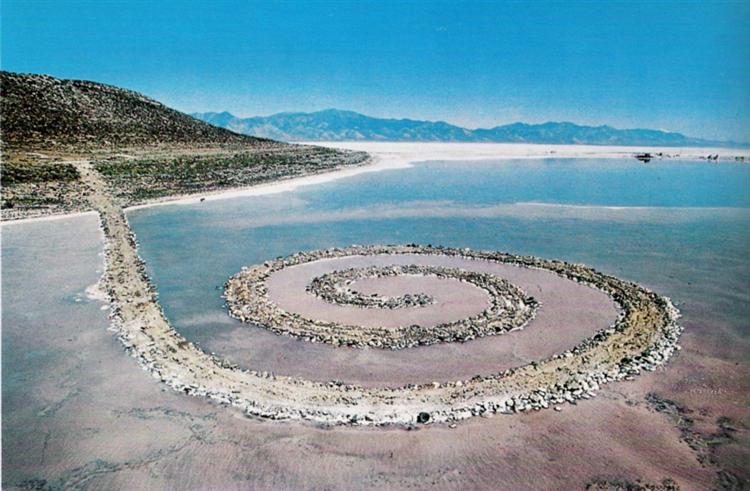 Spiral Jetty, built by Robert Smithson in a remote corner of Great Salt Lake, is an early example of the sort of Earth art that took hold in the 1960s. It poses many more questions than it provides answers, not least of which might be whether its construction would even be allowed today.

Changeable, perhaps even erasable, by time, how permanent should Earth art be?

In the early 1960s some artists abandoned the wall, the gallery, and the museum for altering the landscape outside. That’s what human beings had done to the Earth for millennia—left their mark, indelible or not. This may signal ownership, dominance, or an attempt to connect or infuse nature’s power into the human creature. Or it may be a form of creative play, now augmented by machines.

However, a question arises these days about how environmentally aware and conscientious are land- or earth-artists? Four major figures and four key works help us assess the evolving role of environmental consciousness in earth art. And, two recent events in Los Angeles prompt me to make such an assessment: the installation of Michael Heizer’s rock, Levitating Mass, at the Los Angeles County Museum of Art, and a complementary retrospective, Ends of the Earth: Land Art to 1974 at the Los Angeles Museum of Contemporary Art (MOCA). In this and the following three issues of American Scientist I explore these works and attempt to answer that question.

Robert Smithson’s Spiral Jetty in 1970 put the modern Earth-art movement in high relief. He left his mark with a massive earthwork sculpture on the northeast edge of the Great Salt Lake. It’s 15 feet wide and coils for 1,500 feet near the lake edge. Like much Earth art, Spiral Jetty is a tribute to the daring and imagination of the artist who goes from concept to actual product—the fact that it is done at all is often what constitutes its significance.

It’s a minimalist flat form imposed on the lake, visible when the level’s low—a useless berm, a raised driveway, a widget on a stalk. The water at this shallow, dead-end corner of the lake has become polluted and extra salty from runoff, so it seems nothing’s damaged here from the spiral’s intrusion. However, little environmental consciousness seems involved in Spiral Jetty. It’s inert and quite drab, isolated, somewhat elegant in its blunt simplicity, but essentially pointless, though it does somewhat humanize the remote and desolate site. But it’s a deliberate unnatural contrast with the land and algae–reddened water is what stands out: It resonates with nothing.

At the current MOCA exhibit, we can view Smithson’s own film of the construction process of unloading tons of rock and soil into the simple form; this inscribes the site with the familiar anonymous mark, “I am here!” Man overrides irregular, messy Nature with a perfect arithmetic figure. The gap between the spiral’s curves is kept constant, so it’s an Archimedean spiral, not the logarithmic one usually found in nature, as in a chambered nautilus, a popular symbol of organic growth. This further separates Smithson’s jetty from the natural world.

Using rudimentary engineering, Smithson traced out the spiral with flags and hired a reluctant construction company to fill it in with local soil and black basalt rock. It took six days. I doubt permission to construct it could be granted today, even on private land. However, on closer inspection of the spiral-building video, it’s as if we are close-up, eye-level witnesses to the formation of something meta-natural, an archetypical absolute commanded into shape by a master builder and his crew. The environment yields to the fiats of the engineer geometer, Daedalus in Utah.

The Jetty fades to white

But that original contrast between the spiral’s black rocks and the wine-colored water has softened as time has encrusted the jetty with salts. We learn that Smithson, who died in 1973 in a plane crash while searching for new sites, seems to have wanted the work to disappear, through natural entropy, a concept he discussed extensively. This fade to white may qualify as part of the disappearing eco-act he had in mind. It would then express a potent environmental ethic—the reconquest of human works by persistent natural process. Time scale becomes Spiral Jetty’s transcendent theme, an arts theme—the “Vanity of Human Wishes.” Imposed unnatural forms succumb to inexorable natural powers.

Poet Percy Bysshe Shelley in the 19th century imagined the arrogance of “Ozmandias” (Pharaoh Ramesses II) boasting of a gigantic statue of himself and his massive earthworks—“‘Look on my works, ye mighty, and despair!’” But everything collapses, and the poem ends with this appropriate coda: “Round the decay/ Of that colossal wreck, boundless and bare, / the lone and level sands stretch far away.” Smithson might have been happy chanting that vanitas tune to his own Spiral Jetty. What the rising and falling lake waters don’t destroy, the “lone and level” sands of time surely will.

But somehow we can’t stop wanting to pause time’s effects. Smithson support groups want to restore and maintain the jetty, rescuing it from entropy. What’s an Earth artist to do who may have designed his eco-benign work to have just a few seasons under the desert sun?

The jetty is surely a quaint monument to simple engineering and a solid bit of environmental process art with a hefty dash of cool public relations. But the impulse to rescue and preserve it defines it as fine art like nothing else. Don’t be surprised if someone wants to cover it with a plastic bubble-dome, or even redo it indoors in an artificial pond. “Art endures while life is brief,” indeed!
A further irony—with plans for nearby oil-drilling upsetting artists, eco-activists and community people, preserving the unnatural jetty form as an icon of Earth art has become a wedge against extracting this natural earth product from the ground.