My father built bird houses, lots of them, more than three or four hundred. He got his name in the paper because of them. The mayor of Trenton, New Jersey, “Mr. Ridolfi,” as my father addressed him, visited our backyard and had his picture taken with a recent collection of them, piled against the garage in a steep one-sided pyramid. My father gave this single batch of maybe fifty or more to the city. There would be many more batches.

Why all the houses? Back in the 1970’s and continuing today, fifty years later, blue birds have to compete with House Sparrows and European Starlings—intruders since the 1800’s. All three species are cavity-nesting birds, but sparrows and starlings are more aggressive than blue birds and keep them out of favored sites. The numbers of blue birds have fallen and are still falling today.

Pollution and destruction of habitat depress populations of many bird species, but there is a partial solution to helping blue bird populations: build blue bird houses, ones with the proper size entrance hole–an inch and a half–that favors blue birds, not sparrow and starlings. That’s what my father did.

Maybe we don’t recognize the legacies parents leave for us until we are as old as they. I’m approaching 80, and my father was building all these houses in his 60’s still working at General Motors, but in my twenties I married and left home for graduate school by then. I didn’t have much emotional connection to my father, and he felt I had betrayed him by leaving home. He had no idea what I was getting into–maybe I didn’t either.

I mostly understood his bird houses. There was a reason for them, help the blue birds. A good hobby. But he made so many, too many it seemed, so for me another sign of a kind of mania. If one is good, ten are better was an expression my mother used about him.

There was another strange thing about this mania–it was fed by a neighbor. A carpenter lived next door, another person my father wouldn’t talk to from an old grievance of some sort. He tossed his scrap wood between our properties. My father viewed it as an afront, but at night, he would slink out and take whatever wood he needed for his next houses. It was the kind of low-level theft I associated with my father’s 1930’s Depression generation. Throw nothing away. Use everything no matter how. It makes good sense now as then, if I had fully understood it. But I focused on the foolhardiness I detected in my father’s nightly sleuths: I figured out that instead of getting the better of his neighbor, the carpenter wanted him to take his scraps. Who was fooled then?

After he died, I traveled across country to clean out and sell the family home and bring my mother west, to live with us. By then most of the bird houses had been dispersed to neighbors, family, and the community. Still, I packed four large boxes of remaining ones, maybe two dozens, and shipped them west with things my mother still wanted. She didn’t want the houses. Turns out I did.

I have finally come to see my father as an early conservationist. I would become one. I discounted his early example as an environmental activist until I dug out a house or two from the boxes. Then I discovered a handwritten message to future blue bird house recipients stuffed in the opening on a rolled-up piece of paper. In hand written pencil it said: “Remove side panel to clean Replace panel Spray in opening wx Lysol Opening must face south Bird house made by Dominick Chianese Paint it”

This I realized was instruction from a man serious about his mission; and he signed it. It was a message to me too.

Extravagance was a luxury in his times, and he had found a way to indulge a certain kind of extravagance, and in the service of nature and society. I had struggled in similar ways, to what I hoped was a similar goal, but perhaps not as directly, not as concretely, nor as fully committed.

It has been my commitment over the last three decades to keep his legacy alive. Each family member here and back east has at least one house, and I maintain four currently in our own back yard. Every two years or so I take them down, clean them out, repair them, paint them and hang them back up. Three are occupied already, alas not by blue birds, but by sparrows. Ecological restoration, as we know, is a tricky business.

I guess you might need a lot of houses.

See the Blue Bird Information and Awareness Site at :
https://www.bluebirdnews.com/nest-box-plans.htm 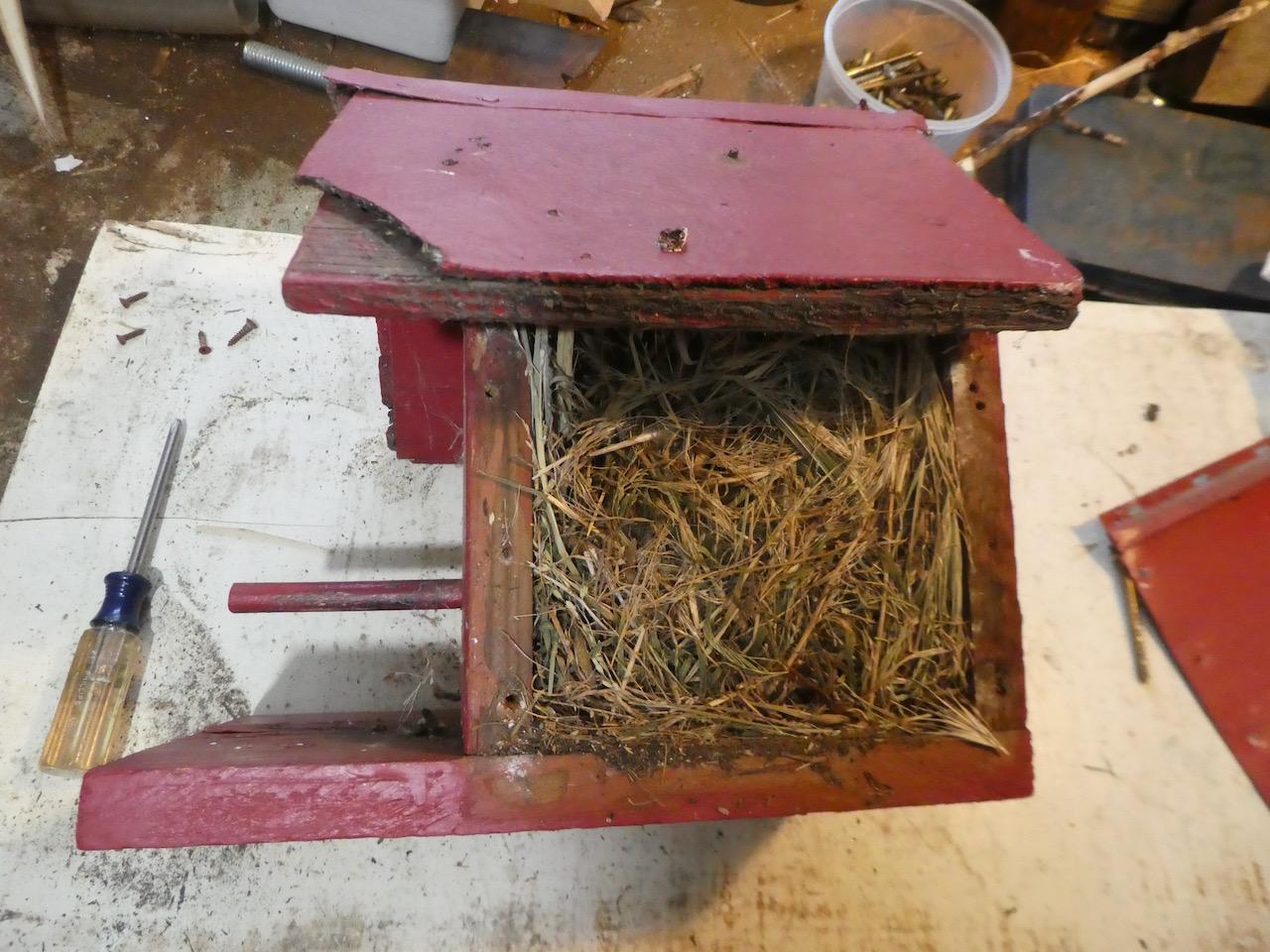 Cleaning out about two breeding seasons’ nesting material in one of Dominick’s houses.
Making slight repairs after a wind storm blew it from the tree, no chicks inside. 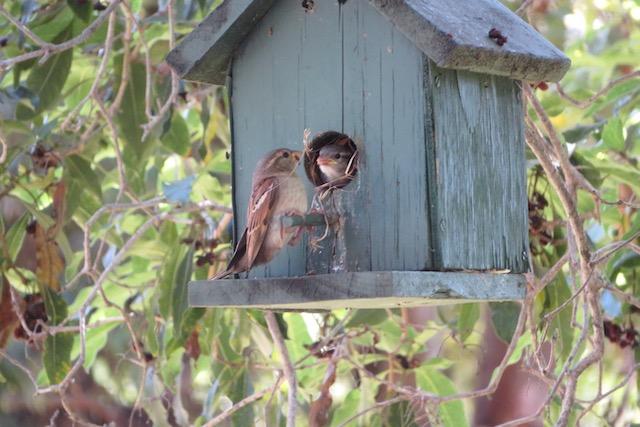 Sparrow family in Spring 2020, with at least two breeding cycles in same house

My father builds more houses on a visit to us in California, November 1971 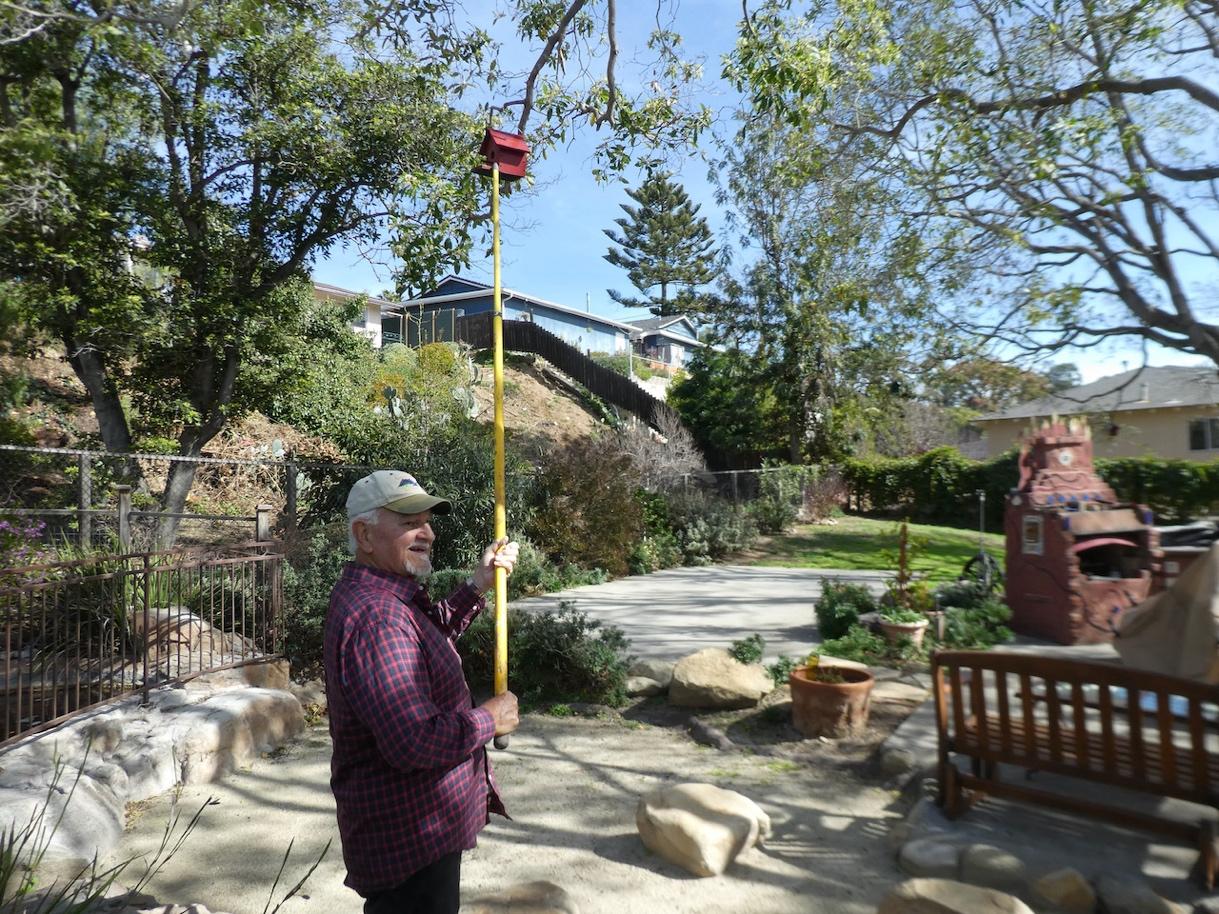 I refurbish and reset one of his 1960’s bird houses in our backyard tree, February 2021