We took a Sunday (May 2, 2021) drive from Ventura to the just re-opened Los Angeles County Museum of Art. You need a timed ticket to tour the two remaining buildings, the Broad and the Resnick, with 25% capacity allowed. There were not that many people there at all, with no waiting in line. After a year, I wanted to see the advertised exhibits but more importantly I wanted to witness the progress on the new building and the demolition of the three or four older ones.

Even though we were told they were not earthquake safe, I enjoyed the galleries in the big tall “old” 50’s-style boxy edifices and got to know our way around the permanent exhibits and the changing ones. We spent many a delightful day in that museum when we lived in the Valley and after we moved to Ventura. Californios love change, I guess, in living places and our buildings.

And change we are going to get. With the old ones fully demolished and cleared, the new building, designed by Swiss architect Peter Zumthor, is underway, but only in the form of the huge dig that will constitute its base deep in the sandy fill of Wilshire Boulevard and the oil-soaked soil near the famous tar pits. I was able to get photos of this but from a very distant viewing platform only on the third-floor open stairwell of the Broad building. 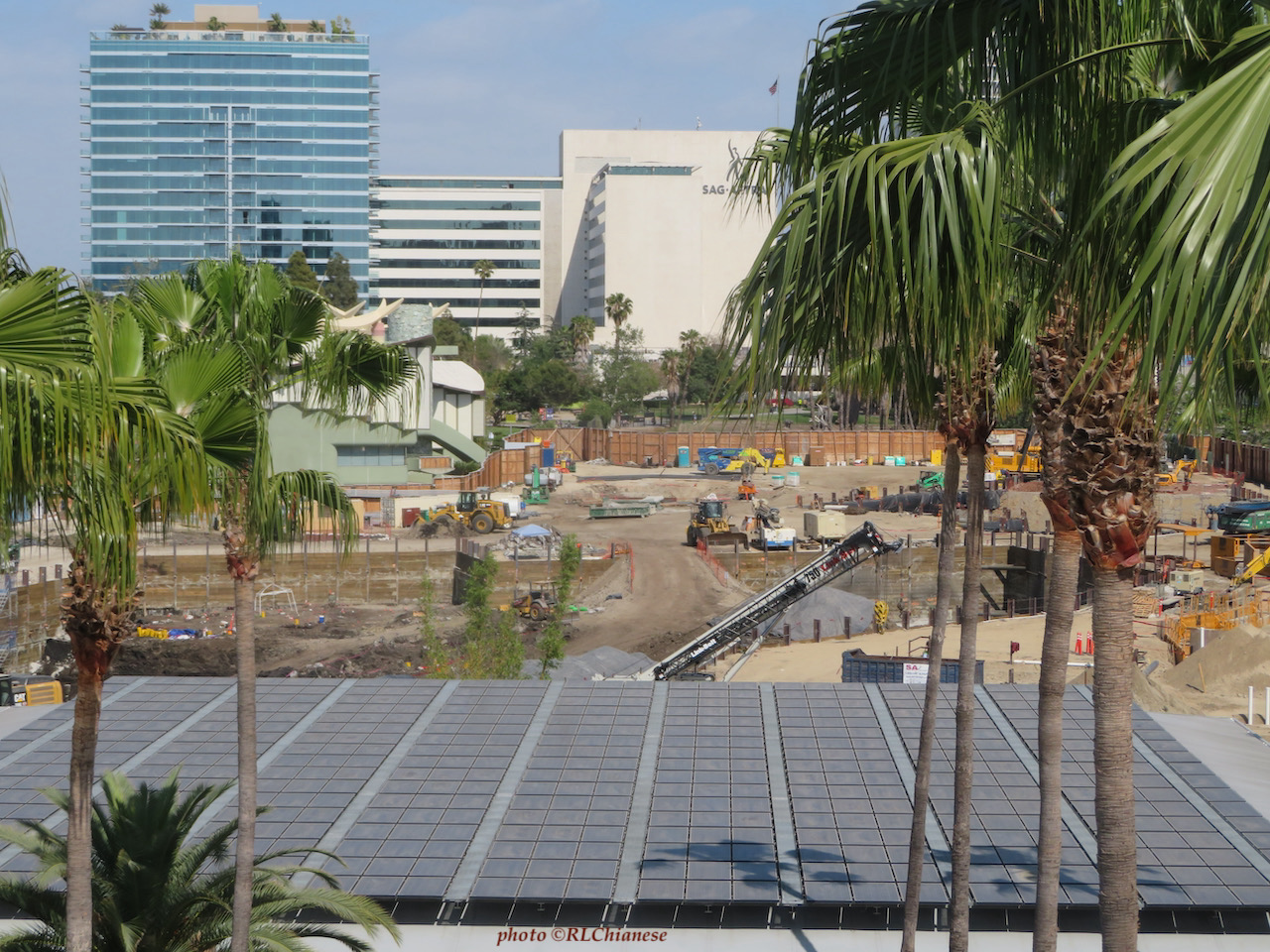 Far left is the Japanese Pavilion, while the tusks of the mammoths in the tar pits peep over the barricade under the palms right, revealing how close to both sites the museum will extend.

From the photograph you can see how vast the understructure of the new curvilinear building will be. Overall, it will be in the form of a hockey stick or partial boomerang and will cross over Wilshire boulevard as some kind of architectural fantasy. I’m not sure it needs to swoop like that–clearly no homages to the square here. A potential problem is its exterior will be glass, exposed to our relentless sun, with various interior partitions and walls, shaded rooms, open galleries, and terraces inside the public viewing space on the elevated second floor. That curving platform for art, with reduced square footage and tall ceilings, becomes one elongated meandering trail above and over the museum grounds.

More importantly, there will be no period or chronological displays of art. In the new galleries, individual and groupings of works will be placed presumably randomly, or thematically, around the new viewing spaces giving the viewer a chance to respond to any work out of context, on its own terms. This may be a way of disconnecting art from various movements or centuries or cultures in world art history and seeing it plain. It’s a potentially useful method–particularly for those who already come equipped with art-history knowledge–and shows some promise however confusing in the large current jumble of exhibits in the Resnick building. We’ll see if it really works years from now on its planned grander scale.

In the multiple displays and contiguous gallery spaces in the Resnick, it’s hard to distinguish one exhibit from another as they are tossed around in the large spaces and flow into each other, I suppose intentionally.

In the first area–about Spaces?–we encounter a transparent plastic-fabric pseudo-house made of pale pastel blue, pink and yellow hanging scrims. It’s pleasant to peer through the walls of this squared off construct as we follow a prescribed trail around it, but it’s hard to know what it means and the museum provides no clue or interpretation. The new way I presume. There’s really nothing to say about it, and its pointless fanciful architecture evokes an imaginary domestic dwelling which we as adults reclaiming our childhood might want to enter but can’t.

But a powerful work of art, newly acquired by the Museum, arrests us in the nearby gallery: Calida Rawles’ “The Space in Which We Travel.” This large gorgeous canvas with brown figures draped in white seeming to rescue each other underwater and with faces embedded in ripples and swirls is a masterpiece of hyperrealist art. The translucent blue waters, shading from opalescent clear to black, seem wet on the canvas, which is full of motion in an ambiguous submerged human ballet or struggle. Where we dwell here is an enchanting and dangerous space.

The most innovative exhibits had miscellaneous works of art with shared themes. A room full of pipes in many art forms, another with rabbits, another with ventriloquist dummies. These were delightful but again meaningless except for the reflections on the multiple forms of pipes we humans have devised and depicted–from 18th century clay soap bubble pipes to new re-workings of Magritte.

Such themed displays become more anthropology than art. Their jumbled novelty, fabricated by the curators, distracts from their seriousness. We stroll through the works as if we were scrolling through images in our cell phones. Assemblage and miscellany seem the new norm even for individual artists such as Cauleen Smith and her table full of objects and images compiling a history of sorts of her experience of special transcendent places and strange Black history moments.

The “Not I: Throwing Voices” exhibit contains puppets, a massive ear trumpet, a video of a speaking mouth, pictures of ventriloquists (all female) and their dummies in a complicated attempt to get us to think who is speaking and with what authority these days. I found this politically significant in terms of questioning who’s in charge of articulating what’s important in our post-postmodern society. The open-endedness of that question speaks to the museum’s refusal to articulate what is going on in any individual work of art or combinations of them it stages for us. A large interjected display of materials and photos in its own room, “Fiji: Art and Life in the Pacific,” seems marooned in the gallery like the full-size native sailing ship beached there, silent, an anthropology exhibit needing much more interpretation, its own voice, and relation to the whole.

The most arresting images in the whole Resnick are by Vera Lutter who took large camera obscura photos of the old galleries. They are reversed negative black and whites, full of ghostly memories of those somewhat familiar spaces inside and out, lost now to time. They function as current and permanent recollections captured by an old technique to result in a new sort of photo magic through very large wall-sized contemporary prints. One of the museum entrance stairway up from Wilshire brought back the physical sensation of climbing and then landing on the open foyer where you had to decide which building you would enter first. Gone now.

The most popular show was a massive collection of Nara’s cartoonish figures in the Broad, invoking the world of Hello Kitty, which brought out Japanese families and their kids. Its charms eluded me. And so did the video art or light shows or whirling balls with light pointers. Ok, I’m retro in that sense and many of the displays left me cold. 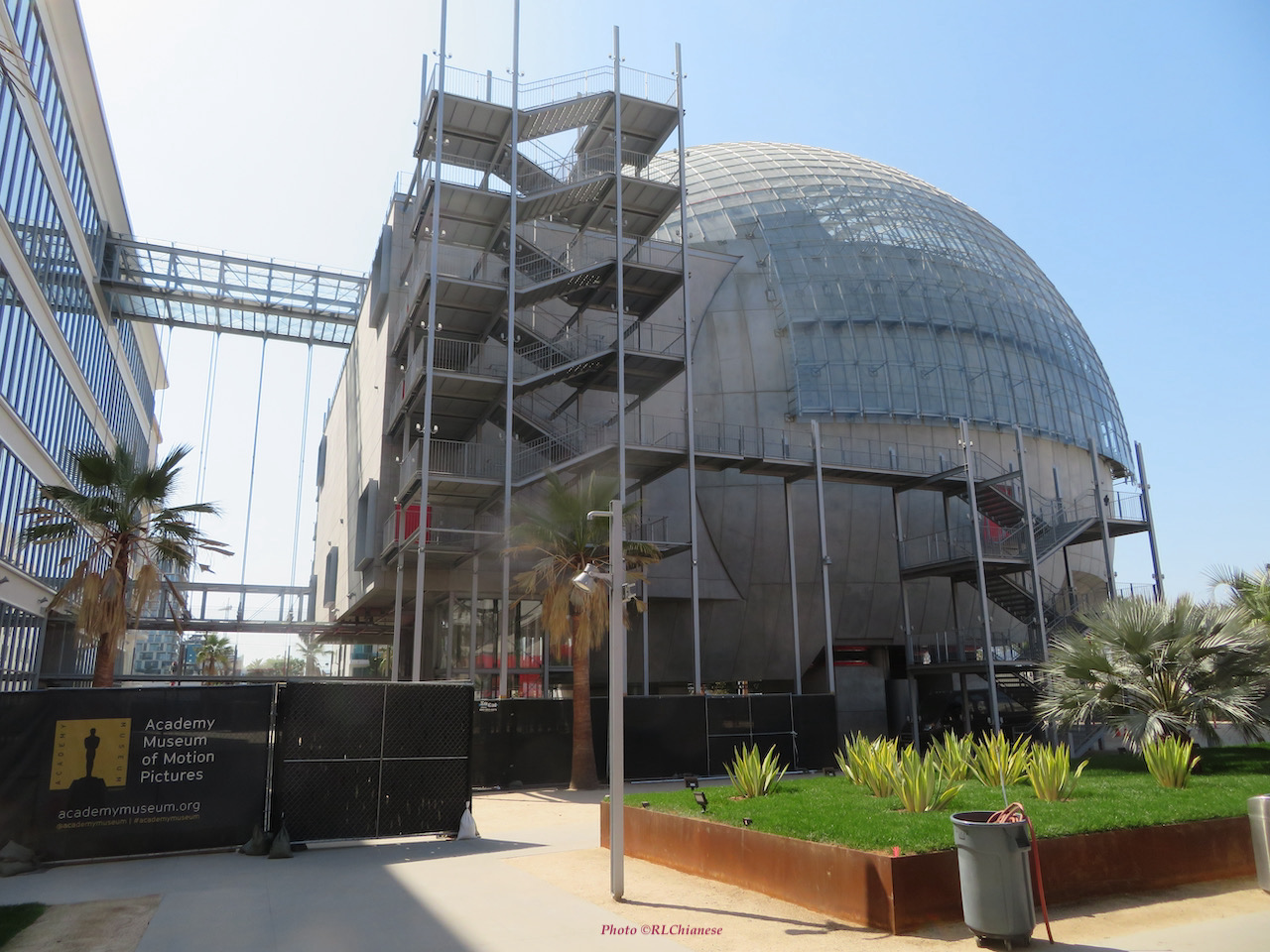 The most amazing structures of all are the newly built Academy Museum of Motion Pictures buildings, almost joining the west end of the Broad/Resnick promenade. What delights will we discover there and how will they compete with the new arrangements of works in LACMA? We’ll have to see.

I may seem somewhat stuck in that nearby ice age pit, responding most to individual works of wall art and finding the new forms of display less than engaging. Maybe the Zumthor building, and this Motion Picture sphere, and the new works of art and film that I look forward to seeing in both will recue me from the ancient tar where dire wolves and mammoths once roamed without the energies of art.