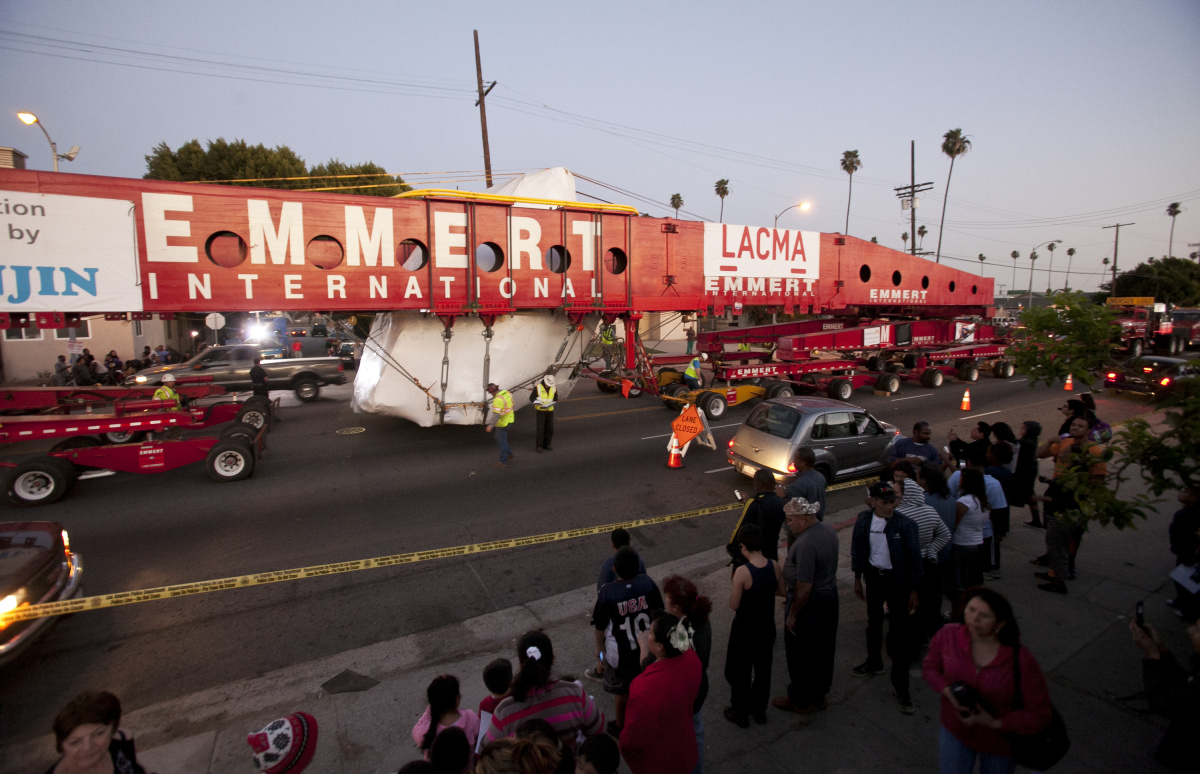 In the early 1960s some artists abandoned the wall, the gallery and the museum for altering the landscape outside. That’s what human beings had done to the Earth for millennia—left their mark, indelible or not. This may signal ownership, dominance or an attempt to connect or infuse nature’s power into the human creature. Or it may be a form of creative play, now augmented by machines.

However, a question arises these days about how environmentally aware and conscientious are land- or Earth artists? Five major figures and five key works help us assess the evolving role of environmental consciousness in Earth art. Two recent events in Los Angeles prompt me to make such an assessment: the installation of Michael Heizer’s rock, Levitating Mass, at the Los Angeles County Museum of Art, and a complementary retrospec­tive, Ends of the Earth: Land Art to 1974 at the Los Angeles Museum of Contemporary Art (MOCA). In this, the fourth in a five-article series, I explore these works and attempt to answer that question.

Michael Heizer’s Levitated Mass (2012) at the Los Angeles County Museum of Art (LACMA) presents a different environmental ethic—monumentality and displacement as forms of envi­ronmental consciousness. Heizer had his eye on this giant granite boulder for 20 years and finally acquired the money and technique to have it paraded like a captured beast to the museum. In fact this 105-mile night-by-night journey was a key component of the work. The rock’s transport from a Riverside quarry through Long Beach on­wards to the LACMA site on Wilshire’s Miracle Mile near the La Brea Tar Pits constitutes what we might call civic processional art. My review of iconic Earth art works cannot report that anyone of them has a particularly environmental or ecologi­cal theme. Smithson’s Spiral Jetty, Christo’s Umbrellas and Goldsworthy’s Storm King Wall certainly make us aware of the materials and forms of the natural world but primarily draw attention to themselves as art rather than em­phasize an environmental purpose. Only in their eventual stately disappearance might they evoke or embody that.

Like some triumphal progress through a grateful city, the citizens welcomed the van­quished trophy rock in the spirit of conquest and fun. It was not really clear what it memo­rialized, but thousand of people came out to cheer its slow, deliberate passage through the streets. If anything was “levitated,” it was the mood of the nightly enthusiasts en route. They were having fun with everything: with its pack­age wrap; with the multi-wheeled linked car­riages under which the rock was slung; with the raising and lowering of wires so the cradled rock could pass under; and with the parade stops at different parts of the 22 cities it tra­versed. (Crowds were not as charmed by the procession later in the year that required the chopping down of sidewalk trees to tow the space shuttle Endeavor 12 miles from L.A.’s air­port to a final resting place at the California Science Center.)

The exhibit opened to the public on June 24, 2012, when hundreds of art fans turned out for the unveiling of Levitated Mass.

Some did find it intriguing—as, for exam­ple, a contrast to the Higgs Boson that was confirmed about the same time, the gigantic massive rock taking the stage with the infini­tesimal mass-creating particle. But once installed on the 465-foot walkway that slants deeply under it, what could Levi­tated Mass commemorate? Like shaped Stone­henge, this quasi-raw megalith has an inscru­table purpose. It didn’t seem to levitate at all; the very visible cleats securing it underneath were judged both too big and likely to fail in an earthquake. The public scorned it as a fraud, a waste of money (however private), “a leviathan mess,” “a Rocky Horror.” Mostly it wasn’t art; it was engineering, crazy expensive $10 million engineering, in a city and state being squashed by a massive rock of debt.

But few identified it as Earth art. In that framework it seems obvious as the return of a long-banished chunk of nature to the paved paradise of Los Angeles. Its displacement from its natural setting makes its contrast with its built surroundings even more dramatic, and its size and weight, its monumentality, at least from below, tries to dwarf the viewer by in­ducing an awe-struck wonder.

But it does seem an environmental dud. Its effect on its surroundings is minimal. Poet Wallace Stevens in “Anecdote of the Jar” (1919) imagines the shaping influence of a sim­ple glass jar placed, or displaced, to a woodsy setting:

I placed a jar in Tennessee,
And round it was, upon a hill.
It made the slovenly wilderness
Surround that hill.
The wilderness rose up to it,
And sprawled around, no longer wild.

The pure form-giver jar reshapes and tames the wilderness simply by its presence on a hill, drawing scruffy nature into its hard, circular energy field. Heizer’s near-wild rock might have had a valuable reverse effect.

But Levitated Mass does not reshape the subur­ban environment or the off-site apartments and skyscrapers that frame it nearby. It sits open and exposed in an overly large playa of crushed rock, and seems forlorn, stuck in limbo, a boulder bolted to a cement pedestrian channel with no connection to its original source, unable to return the city, or itself, to the wild. Its “Levitas” shapeshifts into “Gravitas,” floating into the sinking, fun into somberness.

There’s something iconic about this destitution—as if Earth art itself has reached a sort of dead-end, stranded in a museum exhibit yard. Perhaps it’s L.A., perhaps it’s Heizer who doesn’t mind moving big pieces of na­ture around for the fun of it; perhaps it’s us, who wonder just what our relationship to the Earth has become now that we are much more aware of our deleterious effects.

Are we happy modifying it, reshaping it, stamping it with forms and decorations, and garnishing it with cloth and curiously designed add-ons in stone, steel and cement, and appreci­ating it as art? We could say in a nasty frame of mind that our most influential Earth arts are the garbage pits and toxic wastelands and fanciful faux-remakes of natural environments in our theme parks, resorts and casinos. Is the rock a big chunk of museum lawn art? Worse, is Earth art now uncool, un-green? Could that be Heizer’s subversive point?