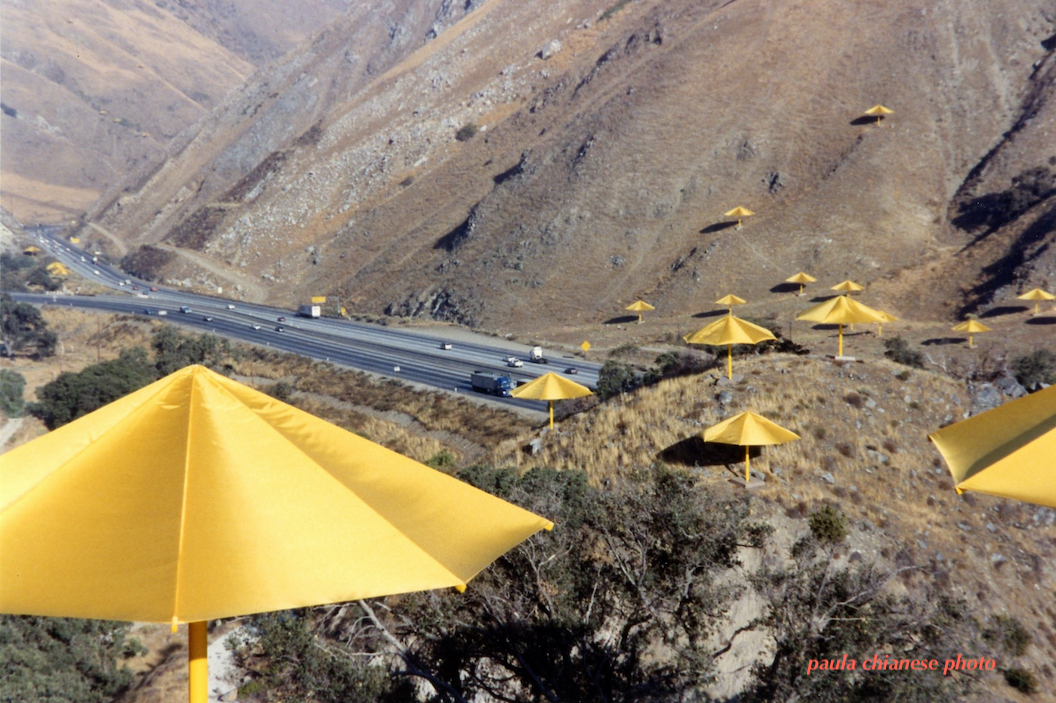 Earth art, even removed, can indelibly change nature in the mind’s eye

EARTH ART
A question arises these days about how environmen­tally aware and conscientious are land- or Earth artists? Four major figures and four key works help us assess the evolving role of environmental consciousness in Earth art. And two recent events in Los Angeles prompt me to make such an assessment: the installa­tion of Michael Heizer’s rock, Levitating Mass, at the Los Angeles County Museum of Art, and a complementary retrospective, Ends of the Earth: Land Art to 1974 at the Los Angeles Museum of Contemporary Art (MOCA). In this, the second in a four-article series, I explore these works and attempt to answer that question.In the early 1960s some artists abandoned the wall, the gallery and the museum for altering the landscape outside. That’s what human beings had done to the Earth for millennia—left their mark, indel­ible or not. This may signal ownership, dominance, or an attempt to connect or infuse nature’s power into the human creature. Or it may be a form of creative play, now augmented by machines.

An impulse to transform a natural site for a limited time inspired artists Christo Yavacheff and Jean-Claude Denet de Guillebon, as it did the artist in the first entry in this series, Robert Smithson. But the effects and intent of the husband-wife team known collectively as “Christo” could not be more different.

Their many projects usually involved fabrics as covers, wraps, decorations or frames that temporarily adorn a spe­cific site or natural feature. It’s as if they wanted to throw a one-time holiday party, for us and nature—in this case, an umbrella festival. These gala intrusions delight, dazzle and amuse. And that is what Christo claimed they intended, nothing more.

In October 1991, through a mountain pass into the great Central Valley of California, the umbrellas ran down hills, stood alone in fields, crowned small summits or lazed along the creases. This work is primarily a form of outlining, high­lighting and decorating the contours of the landscape. It calls attention to the miles-long site in a winding canyon of smooth parched hills that dip and rise like camel backs. People whizz through this narrowing canyon on a treacherous freeway, a thrill-track for suburban racers, except in spring when it sports poppies and goldfields on scattered swaths of green.

In that fall of 1991 the umbrella art arrested us, made us notice the height and depth and rhythms of the naked hills.

We may have seen them for the first time, exposed in dull brown skin. But they were more than a background canvas: We became aware of the weight and mass of the Earth here, its lines and volumes, its tectonic sublimity, its temporal and spatial changes, surely an arts aesthetic that raises con­sciousness about where we are environmentally.

The Umbrellas in California cost $26 million for 1,760 yel­low ones, not including the companion installation of blue ones in Japan, plus 2,000 volunteers and seven years of plan­ning time for both. Volunteers set up and opened the umbrel­las on one day in America and Japan. The nylon fabric, alu­minum staves and metal bases were then all recycled, despite requests to use them for many other purposes.

The project is the epitome of the organizer’s art—for the U.S. umbrellas, 11 manufacturers, 25 private landowners, 960 volunteers to secure and open them, plus well-healed donors, permissive land officials, wary rangers, politicians and art enthusiasts. This makes The Umbrellas and their other works very long-term community projects, just the opposite of Smith­son’s six-day wonder. There’s a sequence here Christo liked to exploit—extended anticipation; then the jubilant though brief manifestation after long and complicated gestation, just like a birthing or a long awaited blooming; and then disappearance. This imitates the life cycle of an organic, growing thing.

Weighing nearly 450 pounds and 19 feet tall by 28 feet wide, each umbrella needed a sturdy footing, which re­quired both earth anchors and the steel bases. Unfortunate­ly, the fierce, erratic winds of the Tejon Pass knocked one of the monster parasols off its embedded base and buffeted a spectator to death. Devastated, Christo and Jean-Claude closed the show right then, but Christo had a philosophical explanation for it:

… the real world involves everything: risk, danger, beauty, energy, all we meet with in the real world. This project demonstrated that everything is possible, because it is part of reality.. The work was designed to generate a confrontation with nature and everything that nature brings.

This unwelcomed “confrontation”—presumably with the reality of deadly nature—does not cancel the aesthetic pleasure of viewing the umbrellas in recollection. The un­adorned pass in fall has its own environmental, high-desert
delights, but after-images of the umbrellas linger in the mind. Christo intended this result: “It’s an aesthetic deci­sion…. The art is only temporary. The only thing that will be left is the landscape and the beauty in your mind.”

Christo thought of the large umbrellas as ethereal houses defining a temporary space borrowed from nature. It’s not traditional sculpture he insisted, where the sculptor encloses spaces and owns them. Once they were removed, however, we define and re-shape space within the whole Umbrellas site more broadly and deeply and lastingly than Christo seemed to claim.But Christo may have implied a separation—the land­scape returns to its original state, while the memory of the artful decorations endures apart. However, a key aesthetic feature of the temporary installation is the indelible recall of how the hills once looked when decked out in their dressy accessories. They don’t look the same anymore. The drama of The Umbrellas has transformed them. 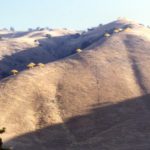 I nearly got a speeding ticket very early one morning as I exalted at the unseasonal arty blooms in the hills at sunrise. The highway patrolman bought my story that I was simply over-enthused by the “host of daffodil” substitutes. After all, I was heading to my literature class and detoured to sneak another passing glimpse of them, “fluttering and dancing in the breeze.” Later, I claim along with Wordsworth that,

They flash upon that inward eye

Which is the bliss of solitude;

And then my heart with pleasure fills,

And dances with the daffodils.

Christo seemed justified in his claim of pushing exuber­ant artistry for its own sake. The big money may be a waste, the effort seems a bit too precious, obsessive—but the point is pleasure and delight and doing a wild, tough thing with high craft and style that quickens the viewer’s heart.

But then, he might go on to claim a greater transformative effect: Not only do we recall them with pleasure, like Word­sworth with the daffodils, but they have changed us and that spot of Earth and time forever. Eyewitnesses of The Umbrellas see the Tejon hills in a new way: This stunning umbrella pag­eant lingers and reframes the Earth itself even in its absence. The giant blooms become imprinted on the hills, a gem-like blaze of uncanny golden flowers, as if we’d seen a magical thing there—an absent banded snake or golden mushroom— that haunts a spot we pass again, per­manently marking it we might say with artful beauty. This surely is one of the softest touches with which any artist manipulates the planet. The Umbrellas is environmental art recollected in tran­quility, at once there and not there.

However, there’s a contrary no­tion. Why adorn or enhance or even compete with nature’s natural display even temporarily? This may be the most peculiar element of Christo’s ef­forts. Does not nature offer us a face more beautiful, more sublime than the strained exertions of human artists, no matter how graceful or memorable the final product? Sprezzatura—doing a difficult thing with seeming ease—is a key to what we call style, in life and in art, but nature surely outpaces us even here.

What the environment generates in the seeming flash of a season requires an army of human makers to imitate over years. We’ll never match nature’s ultimate style, its seeming careless, ongoing creativity. It has taken eons, ages, eras to make a poppy or a gentle rolling hill or a steep valley pass. Our effort to adorn it is our feeble way of recognizing that long-term power, of acknowledging a superior creativity beyond human art.

That could be Christo’s ultimate, perhaps unvoiced aes­thetic statement and represents the essence and extent of his environmental artistry—afterimages of what small, glorious transient things we can make when genially though hope­lessly vying with nature.

Robert Louis Chianese, B. A. Rutgers, Ph. D. Washington University, St. Louis (1971), is professor of English emeritus, California State University, Northridge, a 1979 Mitchell Prize Laureate in Sustainability, and past president of the American Association for the Advancement of Science, Pacific Division (2012), the only humanities professor selected in its 100-year history. The AAAS-PD has just published his monograph, Art Inspired by Science. As a Fulbright Senior Specialist he works to link the arts, humanities and sciences in collaborative efforts on and off campus in environmental preservation. Internet: rlchianese@gmail.com