Those of us who went through the 1971 and 1994 Southern California earthquakes would likely condemn any activity that might stir up another “big one.” Could this be happening right in Ventura County’s backyard?

An oil company wants permission to increase its injection of waste water from the fracturing or fracking process into our fault-laced underground. Carbon California would convert three of its existing extracting wells into injection wells, increasing the 705 barrels a day of waste water forced deep underground by four times as much. That’s 3000 barrels of waste water a day pressured into the ground just east of Ojai.

The California Geologic Energy Management Division (Cal GEM) will hold public hearings to get its input about this proposal.(1) Comments are open until June 10 at this address:
https://www.conservation.ca.gov/publichealth

We know fracking and water injection cause the famous swarms of quakes in Oklahoma, southern Kansas, and northern Texas. Oklahoma had one to three quakes a year before 2009, then forty a year after, due to increased fracking and deeper waste water injections, mapped by the USGS.(2)

Most people do not know that fracking and injecting also cause multiple quakes in Southern California too. Actually, San Bernardino and Riverside Counties had a swarm of a thousand quakes over three weeks in June 2019. While small in magnitude, this “swarmageddon,” as it is called for ominous reasons, just forty miles east of Los Angeles, freaked out plenty of people. Nothing happened, so far.

But other fracked-generated quakes closer to the infamous San Andreas and other more local faults pose very dangerous threats as triggers for something truly catastrophic. Earthquake seismologists are worried. An LA Times article posed this question in its title: “A swarm of 1,000 earthquakes hit Southern California—how nervous should we be?” The obvious answer?—Very. (3)

Ventura County is pocked with oil and gas wells, storage tanks, and pipes everywhere—overground and underground. Its famous field is eight miles long and two wide, between Ventura and Ojai, bisecting Hwy 33. It is the tenth largest oil field in California and operated by Aera Energy with 414 wells in 2016.

The Hamp field east of Ojai, with 74 active wells today, one of which is operated by Carbon California, would be the site of the fourfold increase of waste water by the conversion of three extracting wells to injecting ones. Small impact, right ? (See map of Hamp field 4)

Well, the company’s own map shows the new injection sites close to some major faults—the Big Canyon and particularly the San Cayetano fault. There are smaller “tear” faults nearby as well. And, geologists believe the San Cayetano is connected to the major fault running just off the coast through Ventura to Santa Barbara –the Ventura/Pitas Point fault. This local big fault is thought to be capable of producing quakes of magnitude 6 and greater on its own. A recent study by UCR (5) says it can produce quakes of magnitude 8!

This map by a team at UC Riverside, using SCEC maps (6), shows the Ventura/Pitas Point fault connected to the San Cayetano fault, running right below Ojai. That’s where new waste water injections would take place. (The red line marks the end of the Ventura Fault.) 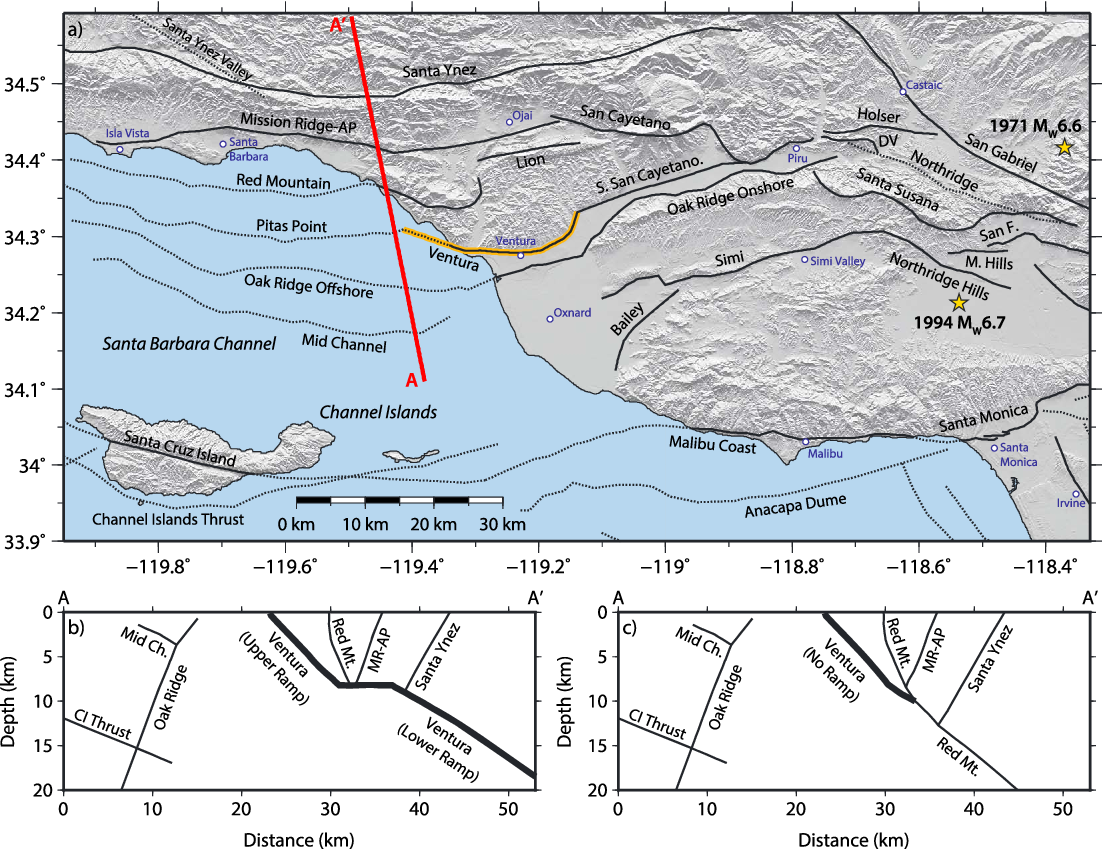 And there’s the problem. This toxic waste water might not only contaminate ground water, although it is injected much deeper down, but it can actually invade, fill, and lubricate the rocks and faults that lay under Santa Barbara, Ojai, Ventura, and points east. The semi-connected faults of Ventura/Pitas Point, San Cayetano, and Pico (formerly the Northridge fault), once slipping or shifting from waste water injection, could produce a near-apocalypitc event.

A Scientific American study of injected waste water concludes that its effects lasts for years. (7) The water is salty, contaminated with chemicals, and denser than normal water, and it fills the pores and cracks of deep rock layers, increasing the normal pressure in the rock, which then can cause it to shift and slip—that’s an oil-and-gas-company earthquake.

Of course the public needs to reject this proposal by Carbon California. The risks far outweigh the benefits—to the company and to society as well. What does that mean?

The US produces more oil than it actually needs—in fact we export more than we import—since 1949. (8) Even before the Covid-19 pandemic, oil prices were at historic lows, then they actually tanked to -$38/ barrel, oil companies having to pay to have it stored. Now at $40/ barrel, where Forbes predicts it will stay for quite a while, it is not really a good investment.(9) Many oil companies will fold. Why produce and frack for more? The export market can dry up soon, especially if China and the US continue Trump’s trade war. Other foreign buyers of our oil are building altenative energy systems as well. Good bye oil, hello sun.

In fact, we are growing out of our own need for oil and that’s due to changes in technolgy: zoomed virtual meetings, more efficient vehicle engines and hybrids, transitioning to alternate energy and one other key factor. California itself produces surpluses of solar power that it has actually paid Arizona to take it off our hands.(10)

We cannot afford to be oblivious to these evolving enegy realities as we consider the fate of our local oil and gas companies that want to produce more of it. Fracking and injecting to produce more oil is not only unwarranted, but down right dangerous.  (“Shaky Ground” has a full report on these risks.11)

That’s what the word “Folly” in my title means—not just foolish or silly, but mad, mentally deranged, lunatic. We’ve had plenty of that these days, and flirting with causing an earthquake for little energy or economic gain would seem to be the definition of madness.