Native Chumash representatives, the City of San Buenaventura, and Mission San Buenaventura have reached tentative agreement to move the large statue of Father Junipero Serra that fronts the Ventura City Hall to the nearby Mission grounds. The unanimous approval of the moving plan by the Ventura City Council (on Wednesday July 15), ends the controversy over where to site the statue of this iconic figure, a saint to some, to others an enslaver and cruel master to Native Californians up and down the state.

Pope Francis made Serra a saint in 2015, and recently (June 2020) he declared the Mission itself a “minor basilica.” But statues of the controversial founder of nine of the California Missions have been torn down, beheaded and defaced in other cities. Ventura’s Serra will exit his public pedestal, a relocated saint, Santo Transportado. 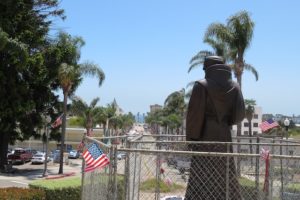 Ventura’s Padre Serra looks off east as he commands the south sloping corridor of California Street through downtown to the ocean. Through a 1936 WPA project, Finnish sculptor, Uno John Palo Kangas, crafted the nine-foot tall Padre with a bit of a scowl, carrying a walking stick, a book, and over his rope belt, a rosary, signs of tenacity, simplicity, and service. Kangas modelled him in clay first, then a mold yielded a concrete version; in 1989, it was cast in bronze. 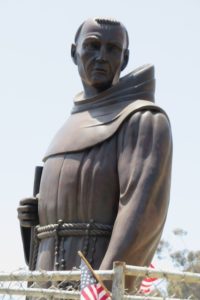 The massive public building behind Serra was once the Ventura County Court House, and since 1974 the Ventura City Hall. In 1913 Beaux Arts style, glazed terra cotta panels create a monumental façade, with faces of happy Friars decorating the lintels. 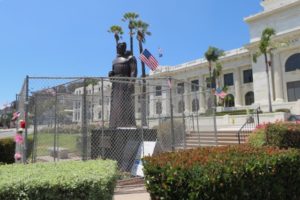 It sits on a large hillside ledge commanding the city streets below. At once a national and state historic building, it speaks of dominance, formality and stability, befitting its original function as a public Hall of Justice. A different justice now is about to meet the Catholic Friar who looms in front of it.

People’s heightened awareness of America’s real history forces its shameful legacy of enslavement, dominance of indigenous peoples, and oppression of minorities to take center stage. That grows out of the Black Lives Matter protests against police brutality this spring, and makes Serra’s central public place in Ventura’s community untenable for many. The chain link cage around him protects him from being defaced or torn down before he can be moved, with bouquets and votive offerings signaling support of others.

Who or what to put in his place?

LA Times Columnist George Skelton (July 10, 2020) suggests a statue of Ishi, a Native Californian dubbed “the last of his tribe” by Theodora Kroeber, wife of Alfred Kroeber. The anthropologist couple received him into their lives and university researches when he no longer wanted or could take care of himself alone in the wild. This is a pointed suggestion—replace the Padre with one of his symbolic victims.

But Ishi is from the North, presumably aYahi tribal member, but more importantly, a somewhat sad survivor of the massacres, deprivations, and eradication policies of the United States. It’s certainly an history lesson we all need to heed, but it is dark and somber and does not mark, except for shared genocides, the world of the Chumash.

I propose that we Venturans commemorate the original founders of Buenaventura– the Chumash who established a village here called Shishalop.  (Earlier residents, the Oak Grove Peoples, are obscured in the veils of pre-history.) 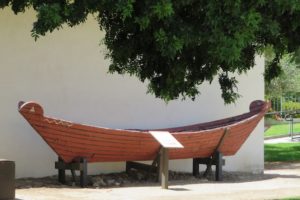 Specifically, a bronze replica of their fantastic ocean-going canoe, the Tomol, might grace the front of our City Hall. As a city monument, the Tomol would honor the Chumash’s look to the ocean and mastery of seagoing life and wise selection of a magnificent site to settle in, as we have done today. Placed on top the Padre pedestal, it would look out to the sea with ancient longing, but also with the heroic energy and ingenuity that these native peoples put to the complex engineering task of building these ocean-going watercraft that enabled strong, kneeling paddlers to cross to the Channel Islands.

Tomols were medium to large in size (8 to 30 ft), able to hold up to a dozen or more paddlers. The Chumash shaved redwood logs floating in the ocean into planks or used native pines. They sewed the planks together with hides, sealed them with tar and pitch, and decorated them with shells. 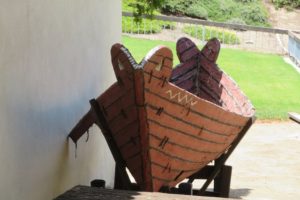 A tomol at the Ventura Albinger Archaeological Museum, made by modern Chumash, clearly shows the deep-V curvilinear shape for speed and breaking through waves and planing on top of the water with a high bow and stern. The planking, binding and decorative details show the attention to their engineering artistry. A replica could proudly front our Ventura City Hall.

We already have a sculptural replica of the tomol. It graces the side of the downtown parking structure, vertically aligned with the building, its paddles forming an abstract pattern when the shadows are right. However, it’s more artistry than history and somewhat hidden from view. 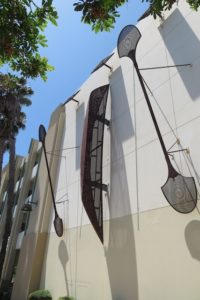 A separate tomol sculpture in front of City Hall would bring to civic consciousness Native history, technology, and artistry, as well as the painful ravages of racism and the city’s modern commitment to the accurate portrayal of the past through an object worthy of public excitement and admiring respect.