Our grammar might teach us to divide the world into active subjects and passive objects, but in a co evolutionary relationship every subject is also an object, every object a subject.
—Michael Pollan, The Botany of Desire

Our grammar might teach us to divide the world into active subjects and passive objects, but in a co evolutionary relationship every subject is also an object, every object a subject.
—Michael Pollan, The Botany of Desire

To accurately convey the interdependence among all the agents in an ecological system, we may need to break free of standard scientific discourse.

Our grammar might teach us to divide the world into active subjects and passive objects, but in a coevolutionary relationship every subject is also an object, every object a subject.  —Michael Pollan, The Botany of Desire

It’s hard to imagine a more pervasive idea in modern science than interdependence, a key concept for understanding all kinds of systems—especially living ones, such as an ecosystem. Diverse entities interact in multiple, simultaneous ways: Think of all critters in a biome doing their own unique things, to each and all. It’s somewhat analogous to wild, sustained, multivocal sounds of many differently tuned orchestras performing and influencing each other at once.

In music that’s called “polystylism.” But in attempting to define how things work in an ecosystem, scientific language tends to focus on a single entity and follow it through a sequence, losing the essence of interdependence along the way.

Professional scientists writing for juried journals and generalist science writers follow a rather traditional script, which contributes to the problem. A typical university guide to writing for science lays out principles of good writing: Be clear, simple, impartial, logically structured, accurate, and objective. In addition, it may warn against some of the writing habits of scientists that can make written articles labored and tedious: Avoid passive voice, past tense, and overly long sentences. A key principle is to shun personal expression: Writers should take themselves and their reactions out of the report entirely.

This sort of language falls silent in describing ecological process. If an important mission of contemporary science is to educate the general public about the notion that all things are connected, then perhaps a new language can help. Evoking a sense of multifaceted reality, capturing its mysteries, and giving a sample of how it works, particularly looped back on interconnected observers themselves, may begin to suggest the need to pay attention with a different sort of focus. Furthermore, describing things with a new ecological language may reveal to scientists processes and interactions that escape ordinary notice. New concepts generate new perceptions, and new forms of expression can enable us to discover new realities.

Nowhere is the possibility of a new language of interconnection more beautifully employed than in the literature—both scientific and poetic—of birds. Consider the description of the flight of an albatross by A. J. Ward-Smith, who, in his 1984 textbook Biophysical Aerodynamics and the Natural Environment, attempts to analyze the interactions between flying creatures and the air in which they move. To stay aloft over wide stretches of the Antarctic Ocean without tiring or resting, the albatross employs a form of soaring that does not depend on rising thermal currents—a unique kind of flight that Ward-Smith calls “dynamic soaring.” The bird loops back elliptically upwind and is slowed to the point of stall, then glides downwind and is speeded up and must avoid hitting the water as it slows. But after diagrams and elaborate mathematical proofs, the author admits in a short concluding paragraph that he has not told the whole story.

Although it was convenient to discuss the mathematical analysis as though the surface of the sea was level, in practice the shearing action of the winds causes an appreciable swell. Under these conditions the albatross uses slope soaring techniques close to the waves to augment its more general use of dynamic soaring. 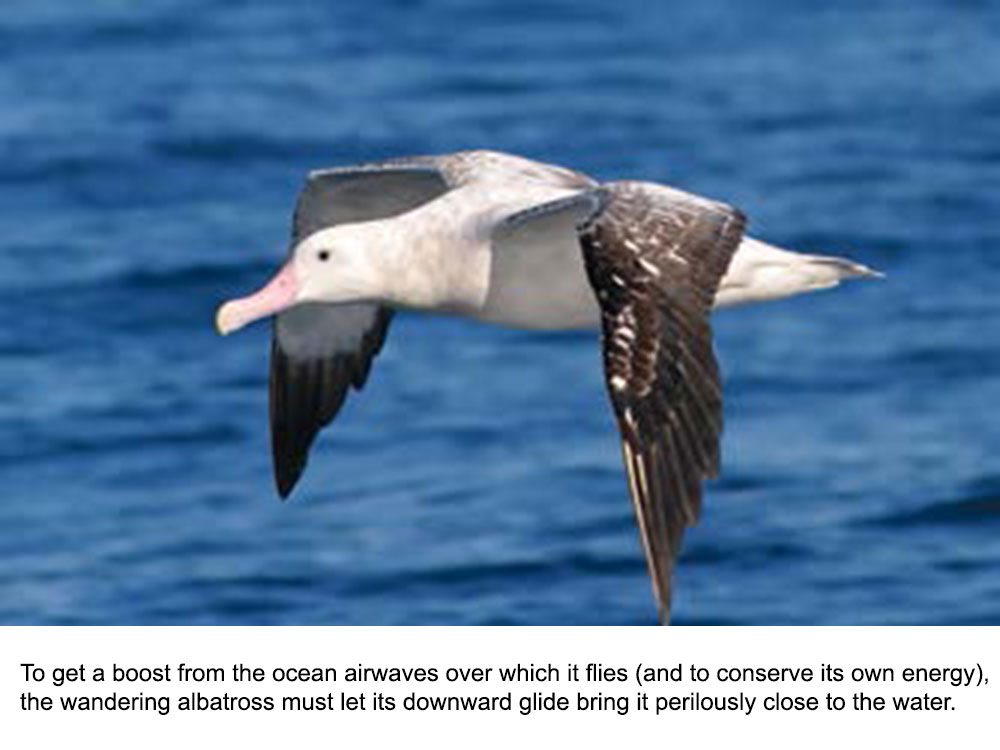